Editor's Note: Team Tigerpaw hopes you enjoy this tiger-tastic take on the classic holiday poem "The Night Before Christmas."

Twas the morning after Christmas, Santa was wiped
He popped open his laptop, an email he typed:
“An emergency meeting at noon today.
Please come to the workshop. I have much to say.”
Elves and reindeer and snowmen, even Mrs. Claus
Didn’t feel like hearing a bunch of blah, blah, blah, blahs.

But they stumbled in with tousled hair and sleepy eyes,
That soon snapped wipe open to gigantic size.
For Santa said, “This operation is broken!”
He listed off issues and left none unspoken.
This wasn’t the normal pep rally from St. Nick.
Said one elf to another: “Oh boy, he seems ticked.”

As Santa continued to vent his frustrations —
Poor project management and no integrations —
A stuffed tiger named Roary sat up in the back
And rolled up his sleeves, revealing a bacon tat.
After St. Nick was done listing every flaw,
He said, “Boss, I must tell you about Tigerpaw!”

The jolly ol’ fellow liked the look Roary bore.
“I love bacon too, little guy. Please say some more.”
So Roary began by describing Tigerpaw One.
“It’s an all-inclusive software that helps you a ton.
You can update the status of kids on your list
And receive an alert if an order is missed.”

The elves started clapping, but Roary wasn’t done.
“This system has bite (he couldn’t resist a good pun).
“Manage toy inventory and order spare parts,
Automatically send invoices and view charts.
Dispatch your Prep and Landing teams without stress
Children around the world you are sure to impress.”

Roary looked at Santa and saw his eyes twinkle.
“Tigerpaw’s the best present ever!” yelled Kris Kringle.
“Now, FINANCE! Now, ADMIN! Now, MARKETING AND SALES!
On, SERVICE! On, SUPPORT! On, DISPATCH and ALL WITH TAILS!
To your stations! To log into Tigerpaw One!
Now automate! Automate! Let’s get this shit done!”

Soon, all souls in the North Pole were using the system,
Installation a cinch thanks to their trainer’s wisdom.
Day or night, the Academy was always there
To watch videos, read guides, no detail was spared.
If ever an issue, support was quick on the line.
The Community forums proved to be a gold mine.

Month-by-month, Santa used Tigerpaw to track progress.
With things running smoothly he had time to decompress.
Meanwhile, the head elves kept processes streamlined,
With automatic workflows mistakes declined.
Morale was up, smiles shone brighter than tinsel
For Tigerpaw made every task more simple.

On the next Christmas Eve, everyone let out a cheer
As the Big Guy donned his suit and strapped in his reindeer.
Santa then gave the first gift to Roary the Tiger.
“Please ride in my sleigh and see the fruits of your labor.”
Late into the night, present delivery a snap —
Each SO closed on the Tigerpaw mobile app.

At last, Santa climbed up the final chimney.
And swung himself into the sleigh with a shimmy.
Then Santa began his traditional sign-off —
But Roary interrupted him with a fake cough.
“Look, I love a good ‘Merry Christmas’ from St. Nick,
But I think you need to say something with more kick.”

Santa turned to his furry friend and with a guffaw,
Said “Let’s go get a drink, Roary. We did it. High-paw!”

Watch our Tigerpaw Story video and learn more about our mission and culture. 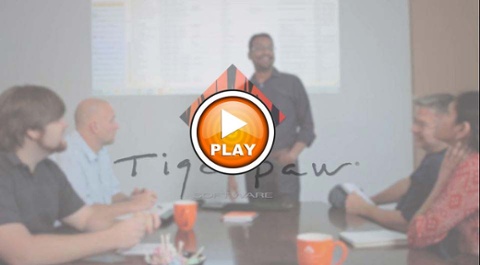 Whether you're a long-time customer or partner, a newbie or a future Tiger, the Tigerpaw Blog is here to help you navigate the world of PSAs. From best practices, software updates, industry news, and more -- find it right here on the Tigerpaw Blog.